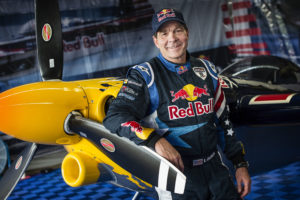 If you think motorsports are limited to the land, you’ve never heard of the Red Bull Air Race, one of the fastest motorsports in the world. Among this growing sports’ most accomplished stars is Kirby Chambliss, who lives and trains right here in Arizona. Active in the sport since 2003, he is ranked #9 in the esteemed Master Class division and tied for third on the all-time wins list.

The current Red Bull Air Race season, with a total of eight race events, began in March of this year. Kirby will be competing for the title of World Champion at the final race at the Las Vegas Motor Speedway on October 15-16.

We had the chance to learn more about Kirby, what keeps him going in this heart-pounding sport and what he loves about Arizona.

City of residence: The Flying Crown Ranch in Eloy

Why did you move to Arizona? I moved in 1987 because Southwest Airlines opened the base in Phoenix and I wouldn’t need to commute anymore. Prior to that I was living in San Antonio and commuting to Houston.

How did you get started as a pilot? I always wanted to be a pilot! I’ve been flying since I was a teenager. My Dad was a skydive instructor, so I grew up around jump planes and skydivers. I always knew what I wanted to be when I grew up.

Are you ex-military or did you become a pilot through another route? I gained all of my experience through the civilian route. After I worked and achieved all my ratings, I became a flight instructor and had several jobs before I got my first corporate job at 21, flying a Cessna Citation.

When/why did you start competing in aerobatics? When I was flying corporate, the Chief Pilot required us to take some aerobatic training and I fell in love. My next job which with Southwest Airlines allowed me to pursue my passion and begin competition flying in 1986. I flew competition until 2005 and won the United States National Aerobatic Championship five times. I also accumulated 13 medals in world competition during that period.

What’s your favorite part of the Red Bull Air Race? No doubt, the flying!

What’s next for you? I would love to own a race team.

Favorite AZ road trip: Road? I would rather fly!

Best place to watch an AZ sunset: My house has epic views of the sunsets in the Sonoran Desert!