Fans of Mid-Century Modern architecture would be forgiven if Phoenix didn’t immediately spring to mind as being a haven for the movement. However, one of the era’s most prolific and influential architects did most of his work here.

Ralph Haver, a California native who moved to Arizona following his service in World War II is perhaps best known for his “Haver Homes,” affordable, single-family housing designed in the contemporary modern style. Hallmarks of a Haver-designed home include brick or block construction, Polynesian-inspired sloped rooflines, floor-to-ceiling walls of glass, clerestory windows, brick patios and angled porch posts. While modestly priced at the time they were built, his homes are in high demand today, often selling for half-a-million dollars or more following renovation. 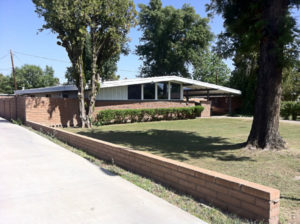 A Town and Country model home in Janet Manor by Ralph Haver in Phoenix.

But it wasn’t just his single-family homes that made him an influential architect of his time. He also designed a number of commercial and civic structures, including churches, schools, banks, corporate centers and condominium complexes. One of his signature structures, the Cine Capri theater located on the corner of 24th Street and Camelback, road was razed in the mid-90s to make room for a high-rise office building.

It can be challenging to verify the authenticity of many homes and structures Haver is believed to have designed. Sadly, blueprints and other verification documents were thrown away when his eponymous firm’s last office was vacated.