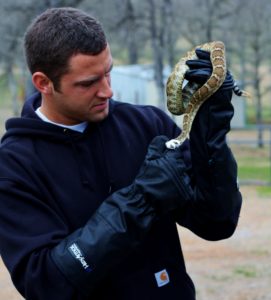 Cody Will trains dogs to avoid rattlesnakes. Photo courtesy of Cody Will.

So much of the metro Phoenix area now resembles any other large American city, it’s easy to forget the area is the natural home to more than a dozen species of rattlesnakes. Each year, thousands of people and dogs in the United States suffer venomous snake bites. These bites are incredibly painful and potentially fatal, but it’s actually possible to train dogs to recognize and avoid rattlesnakes — and to alert their owners that one is near.

Rattlesnake Ready is a training program designed by professional snake handler and dog trainer Cody Will. By using live, muzzled snakes during training, dogs are taught to recognize the sight, sound and smell of rattlesnakes and quickly learn they are to be avoided. This immersive training is so effective, it generally only takes about an hour for the dog to become fully trained. And not only will dogs learn to avoid the snakes themselves, they become a sort of “personal rattlesnake detector” for their human companions.

Even if you don’t have a dog, it’s important to remember that it’s possible to encounter a rattlesnake any time you’re enjoying outdoor activities in Arizona. Some tips to help avoid rattle snake bites include: