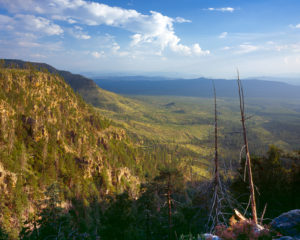 We all know the story of Sasquatch and Bigfoot, but did you know that Arizona has a mysterious beast of its own? Better known as the Mogollon Monster, the creature has been spotted on the Mogollon Rim in northern Arizona, near Payson.

There is little information on the beast, but the few documented accounts state that the monster stands seven feet tall and is covered in gray or reddish-brown hair everywhere except its hands, feet, chest and face. Some alleged monster footprints have measured 22 inches in diameter.

People who have seen the monster reported hearing a piercing scream that does not sound like anything a known animal could produce and being overcome by a horrendous odor.

There are accounts of the beast being spotted in the Grand Canyon, and Native American tribes in the Mogollon region have various legends to explain the beast’s existence.

One story says the monster is an exiled chief who turned himself into a monster to scare his former tribe; another says that a medicine man turned a thief into a monster after he stole a chief’s wife.

Due to a lack of convincing evidence, Weird U.S. calls the Mogollon Monster “Bigfoot’s loser cousin.”

Regardless of which stories you believe, the monster is bound to make your next camping trip on the Mogollon Rim a little creepier. Have you seen the monster?