Get Your Flinstones Fix in Northern Arizona 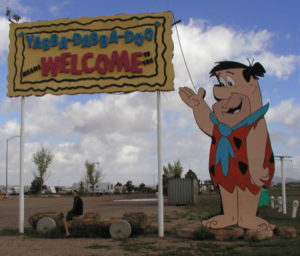 There hasn’t been a new episode of The Flintstones since 1966, but fans of the classic cartoon can immerse themselves in the Stone Age at Bedrock City in Northern Arizona.

The Flintstones-themed amusement park, campground and RV park is located near the Grand Canyon at the corner of State Route 64 and U.S. Route 180 in Williams. The park was built in 1972 and used to be one of two Bedrock Cities in the United States. The other, in Custer, South Dakota, closed in 2015.

It’s easy to spot the small outpost from the highway–the plateau the park calls home has little vegetation, allowing the brightly painted buildings and character statues to stand out.

The park offers a truly immersive Flintstones experience. Enjoy a meal at Fred’s Diner, browse souvenirs at the gift shop, or slide down a brontosaurus’ tail at the amusement park.

The city also includes a volcano, a jail, a beauty parlor, a post office, a police station, a few houses and a theater that plays Flintstones cartoons on repeat throughout the day.

Set up camp for a night or two at the campground—the facility is equipped with amenities for both tents and RVs, including showers, bathrooms, laundry, a game room and a market.

Visitors used to be greeted by live actors playing Fred Flintstone and his pal Barney Rubble, but the park’s remote location made it difficult to find actors, causing the owners to replace people with larger-than-life statues. The park is open every day of the year except for Christmas Day.

In 2015, it was reported that the owners of Bedrock City were trying to sell the property for $2 million. Fans of the park should know: the rights to The Flintstones characters don’t transfer over to the new owners.

Visitors have mentioned that the park is often nearly empty, adding a certain eerie charm.

Whether you make the drive solely to visit Bedrock City or if you stop by on your way home from the Grand Canyon, you’ll satisfy your Flintstones fix at this quirky spot.