The World’s Largest Travertine Bridge is Tucked Away Near Payson 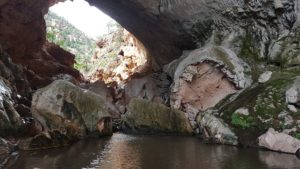 Courtesy of macphysto via Pixabay

Tonto Natural Bridge—the world’s largest travertine bridge–used to be a hidden gem near Payson. In recent years, however, Arizonans and visitors alike have discovered the beauty of Tonto Natural Bridge State Park—and it’s easy to understand why this spot has become such a popular destination.

Nestled in Pine Canyon off of Highway 87, the park’s main attraction is a 183-foot high, 400-foot long travertine bridge—and the cave beneath it—that features a trickling waterfall that runs from the top of the bridge into Pine Creek.

Scientists believe the bridge was formed by a lava flow that eroded more than 5,000 years ago. That erosion was eventually covered by sea water and another lava flow, which eroded again to create Pine Creek Canyon. Precipitation created limestone aquifers beneath the rock, carrying dissolved limestone and calcium carbonate that formed a travertine dam. Pine Creek eventually eroded that dam to create the bridge we see today.

The bridge was discovered in 1877 by David Gowan, a prospector who stumbled upon it while he was being chased by a group of Apaches. Gowan hid in a small cave under the bridge for three days and eventually claimed squatter’s rights, settling his family in the small valley in 1898.

The park offers a variety of hiking trails under and around the bridge, all of which are under one mile. They can be steep and rocky, though, so plan accordingly. Some of the trails wind along Pine Creek to mossy waterfalls that look like they don’t belong in our desert state. Others end at viewpoints just beneath the bridge. You can also see the bridge from four viewpoints in the parking lot.

You can easily spend a day checking out the trails and the Goodfellow Lodge and visitor center or have a picnic lunch in the grass.

The entrance fee is $7 for adults ages 14 and up, $4 for children ages 7-13 and free for children under the age of six. Pets are not allowed on the trails in the park. The facility is open daily from 8 am to 6 pm.