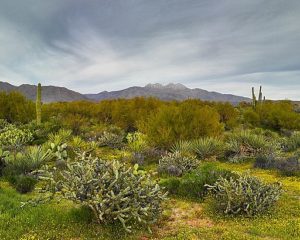 Did you know that Arizona is the only state that contains part of the four North American deserts? The Great Basin, the Chihuahuan, the Mojave and the Sonoran deserts each touch part of the state, making up its diverse landscape.

The Great Basin Desert covers the northeastern part of the state, including the Grand Canyon region. This desert experiences cold, snowy winters and hot summers, with temperatures reaching over 100 degrees. Sagebrush and saltbush grow well in this climate. You will find coyotes, rattlesnakes, pronghorn antelope and eagles in the Great Basin Desert.

The Chihuahuan Desert is the largest desert in North America, and can be found at the southeastern tip of Arizona. This high desert appears above 3,500 feet, so its cacti, agave and creosote get a bit of frost in the winter months and wildflowers grow in warmer parts of the year. Hummingbirds, javelina, rattlesnakes and ringtail cats are common sights.

The Mojave Desert is the driest of the North American deserts, and covers a small part of Arizona’s northwest corner. This desert experiences very hot summers and very cold, rainy winters. Many of the plants in the Mojave Desert, such as the Joshua tree, are inactive, meaning they don’t use water to survive. You may encounter tortoises, tarantulas, Gila monsters, bighorn sheep and kangaroo rats on your next visit.

Last but not least, the Sonoran Desert covers more of Arizona than the other three deserts, surrounding Phoenix, Tucson, Gila Bend and Yuma. The desert supports more than 2,500 types of flowering plants including the saguaro cactus, which can only be found in the Sonoran Desert. A variety of animals, including Gila monsters, horned lizards, desert mule deer and javelina call this desert home.

Have you visited each of Arizona’s deserts?