How Did Ahwatukee Get Its Name? 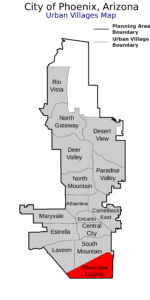 Ahwatukee is an “urban village” in Phoenix tucked between South Mountain, Interstate 10 and the cities of Chandler, Guadalupe and Tempe. While not an official city itself, Ahwatukee certainly has its own personality. How, you ask, did Ahwatukee get its name? It appears that the village’s name is a product of an incorrect translation.

According to The Arizona Republic, Dr. W.V.B Ames built a house on the large plot of land he owned south of South Mountain. He named the property Casa de Sueños, or House of Dreams.

Helen Brinton purchased the house in 1935 and renamed it Ahwatukee, which she said was the Crow translation of House of Dreams.

However, Brinton appears to have used the Crow words “awe chuuke,” which means “on the other side of the hill” to name her new home. The Crow tribe is not native to Arizona and can instead be found in the northern Plains of the United States. Brinton spent a lot of time with the tribe in Wyoming and was very impacted by her experience.

The house no longer stands, but parts of it were used to build the Our Lady of Guadalupe church.