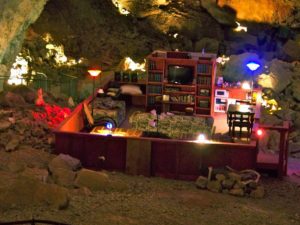 The room is 600 square feet with 70-foot ceilings. Lights illuminate the 65-million-year-old cavern walls. Turn out those lights and bask in total darkness and quiet. You’ll only be able to hear your breathing, because you’re the only living thing in the cavern. It’s too dry for insects, bats and other cave-dwelling creatures.

Although you are 22 stories underground, the room features the normal amenities of a motel room, including two double beds, a fold out sofa, a library of books, records and magazines, a working bathroom and a television.

This room was initially intended as a fallout shelter for the 1962 Cuban Missile Crisis. President John F. Kennedy began stockpiling food and supplies in the underground cavern for himself and about 2,000 other U.S. citizens in the event of an attack. Due to the dry environment, all of the food is still edible today.

If you want to spend a memorable night underground, you’ll have to cough up about $900 per night. For those who would rather not partake in the cavern slumber party, there’s the Cavern Grotto underground restaurant.