From Hideaway to Mass Grave: Apache Death Cave Near Winslow 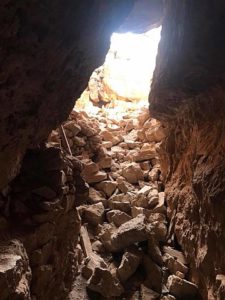 After a group of Apaches raided a Navajo encampment near the Little Colorado River and killed all but three people, the Navajo leaders sought revenge.

In 1878 they sent 25 men to find the attackers, eventually tracking them down in a cave near Canyon Diablo. The scouts felt the hot air from the Apaches’ campfire emanating from the cave, which was large enough to hold all of the Apaches and their horses.

The Navajo gathered dry wood and brush, starting a fire at the entrance of the cave. The Apaches killed their horses and used their water supply to put out the flames, using the corpses of their former steeds to block the cave’s entrance.

One Apache escaped, begging for mercy at the Navajos’ feet. After learning that the three survivors of the Little Colorado attack had died, the Navajos showed no mercy, shooting their guns into the cave, reigniting the fire and ultimately suffocating the 42 Apaches inside.

After the massacre, the Apaches never raided the Navajo people again. No Apache will use the cave for any reason. 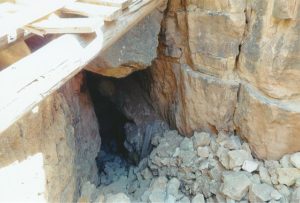 Entrance to the cave. Image courtesy of Marine 69-71 via Wikimedia Commons

Settlers briefly occupied the town of Two Guns near the cave, but after a series of strange events, many people left, saying the area is cursed. For a while, one man tried to make the cave – and the Apache bones inside it – a tourist attraction. Residents reported strange groans and ghostly footsteps, and mysterious disasters and disappearances.

The cave is located on Route 66 and Indian Route 6930 between Flagstaff and Winslow.