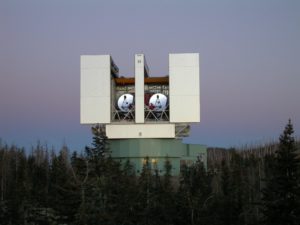 Near Safford, a giant telescope looks into the depths of the universe from Mount Graham. Officially known as the Large Binocular Telescope Observatory (LBTO), each “eye” of the binoculars is an 8.4-meter telescope. In fact, it’s one of the first Extra Large Telescopes in the world. Its design makes it the ideal telescope for spotting faint objects throughout the universe.

The LBTO’s scientific interests are wide ranging, spanning exoplanets to the high-redshift universe. The observatory aims to be a community observatory, allowing scientists to access the telescope’s world-class technology and image capture capabilities for their research. Hundreds of papers have been published based on observations at the LBTO.

LBTO partners with the University of Arizona, The Ohio State University, the Research Corporation for Science Advancement and astronomy groups from Italy and Germany. It is part of the Mount Graham International Observatory, which encompasses all the telescopes on Mount Graham.

Want to visit this massive telescope? Start at Eastern Arizona College’s Discovery Park Campus, where they conduct weekend tours of this telescope and others in the observatory and the surrounding terrain. Tours run from mid-May to mid-November, and include a lunch near the summit of the mountain. Advance reservations are required.