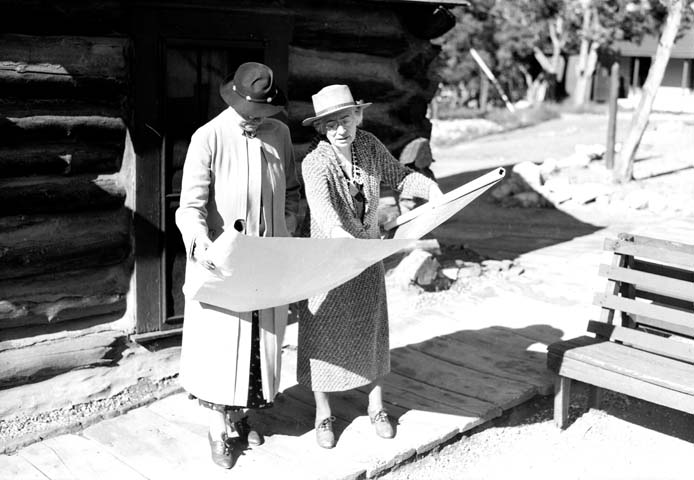 Mary Colter (right) showing blueprint to Mrs. Ickes (wife of the Secretary of the Interior), circa 1935. NPS.

If you’ve visited the Grand Canyon, chances are you’ve seen some of Mary Colter’s work first-hand. She contributed to many of the buildings dotting the national park, including The Desert View Watchtower (1932) and Hopi House (1905). She considered the La Posada hotel in nearby Winslow, Ariz., her masterpiece.

Mary Colter is a household name among architects and history junkies across the southwest — but what else should we know about this trailblazing, innovative 20th century woman?

Colter was born on April 4th, 1869 in Pittsburgh, Pennsylvania to Irish immigrants William and Rebecca. The family moved often during Colter’s childhood, including to Texas and Colorado before settling in St. Paul, Minnesota when Colter was 11 years old. It is during this formational time that Colter was first exposed to indigenous American artworks, specifically brightly colored Sioux sketches.

#2 – Colter attended one of the first art schools in the West.

The California School of Design opened in 1874, providing a comprehensive art education to students that included drawing, painting and apprenticeships. Colter was exposed to the ambitious architects of San Francisco, whose lively discussion likely influenced her to pursue architecture as a career.

One of Colter’s contemporaries in St. Paul was Minnie Harvey Huckel, as the two were both members of the New Century Club, a women’s civic group. Huckel knew of Colter’s affinity for Native American art and may have recommended her for the Hotel Alvarado Indian Building in Albuquerque, New Mexico. Colter took the job in 1902 — and it was the first of many now-famous projects she would complete with the Fred Harvey Company, including those at the Grand Canyon.

#4 – She had an impressive eye for detail — and was known as a stubborn perfectionist.

In all of Colter’s work, there’s an apparent understanding of the geographical area’s history, landscape, inhabitants and culture. For example, at her famed Hopi House, she insisted on employing local indigenous builders, used local materials when possible and attempted to create a near-accurate representation of an ancient Native American structure. Other projects exhibited her dedication to detail; Lookout Studio was constructed from Kaibab limestone, mimicking the stratification of the surrounding geologic features.

#5 – As a woman in a male-dominated field, Colter was well ahead of her time.

Frank Waters, a well-known historian, described Colter as “an incomprehensible woman in pants,” sketching and riding horseback. Colter shattered stereotypes about what a woman could pursue in the early 20th century — and her sheer willpower left an indelible impact on the region. Despite being referred to as a mere “decorator” by her colleagues at the time, she would undoubtedly retain the title of architect today.