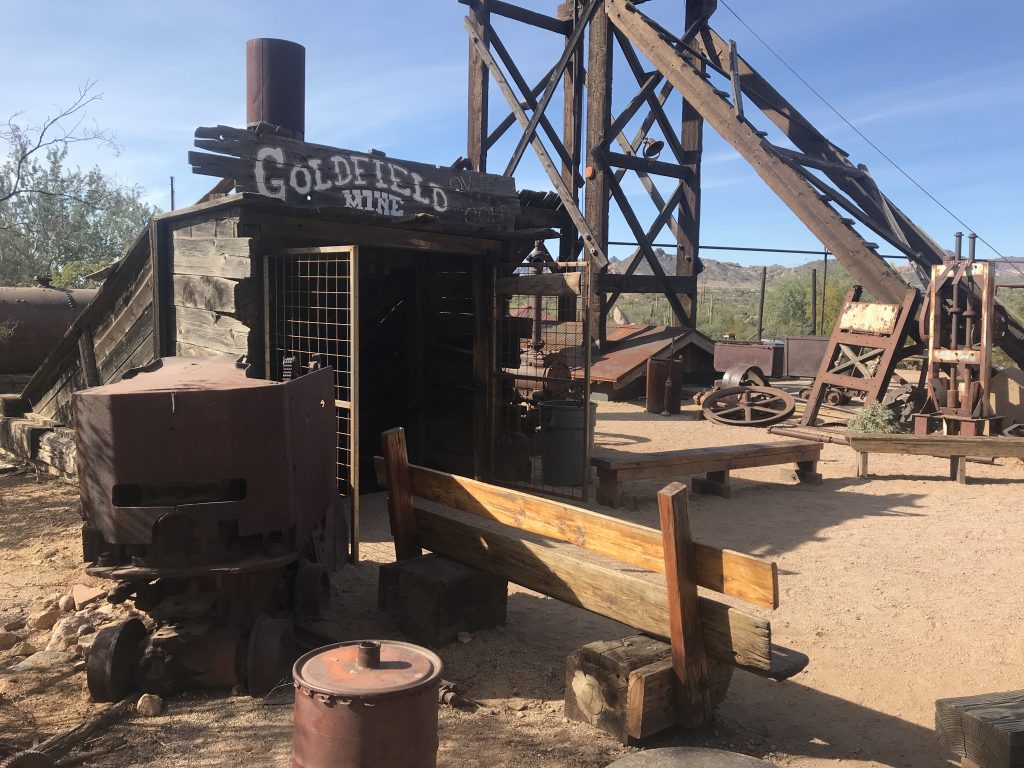 Visiting from out of town and looking for an authentic Wild West experience? Need something to do with the kids this weekend? Bored with Phoenix? Maybe you’re just curious about what else southern Arizona has to offer. Look no further than the Goldfield Ghost Town, at the base of the Superstition Mountains right off the AZ-88 highway.

This unique destination transports visitors back to the late 19th century when Arizona was a little more lawless. The walkable Main Street is lined by authentic-looking buildings housing a diversity of merchants to keep the whole family entertained from sunup to sundown.

A Little Bit of Background

When miners struck gold in the Superstition Mountains in 1892, settlers flocked to the area, hoping to make a fortune themselves. Soon enough, a tiny, yet bustling, town emerged. At its peak, 1500 people called Goldfield home. A post office sprang up in 1893, alongside three saloons (because just two wouldn’t do – miners are thirsty!) a boarding house, a general store, a blacksmith’s shop, a butchery and a school. It seemed like Goldfield was going to make it big.

The area’s luck quickly ran out, though, when the quality of gold ore suddenly dropped only six years after it was discovered. In 1898, the post office closed its doors, the miners moved on and the saloons, sadly, stood empty. 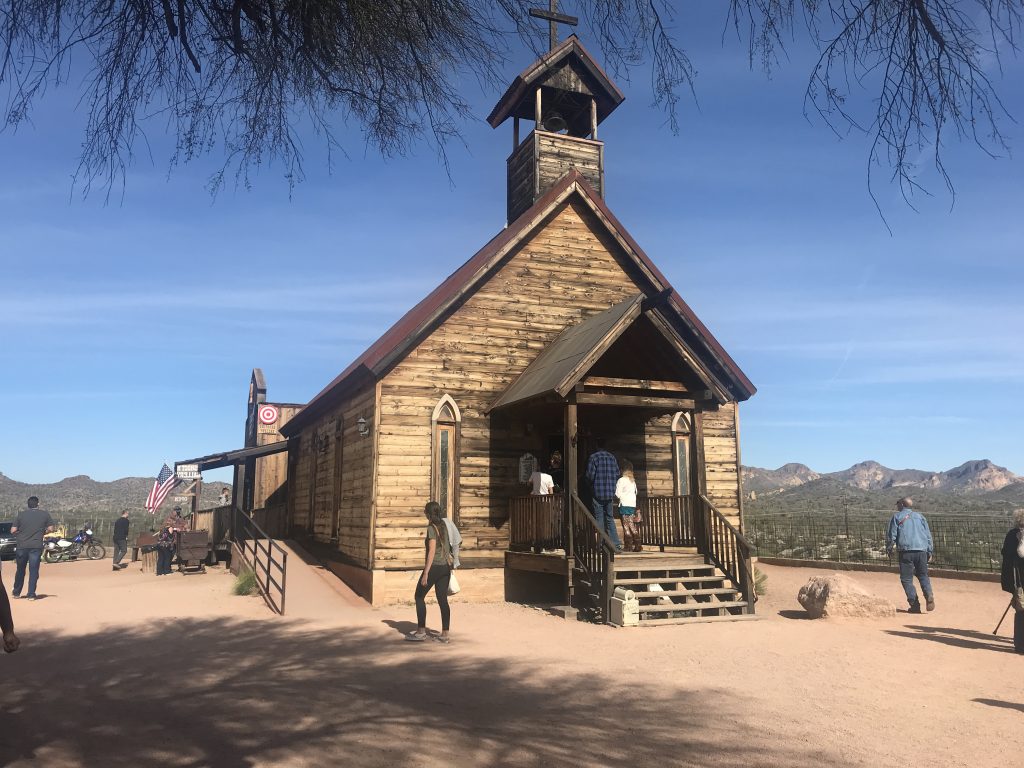 The old church in Goldfield was built in 1931 and contains an original organ from the 1880s.

Goldfield experienced a brief rebirth in the early 1920s, renamed Youngsberg, when new mining equipment, a mill and a cyanide plant moved into the area. Nothing like a booming cyanide industry to keep things going, right? Apparently, wrong. Once again, the post office was discontinued in 1926. This time, miners, millers and cyanide chemists abandoned the unlucky township.

Finally, in 1966, Robert F. “Bob” Schoose made a trip to the Superstition Mountains and saw plenty of potential. He was a known ghost town and treasure-hunting enthusiast, with a life-long dream to own his own ghost town. He and his wife, Lou Ann purchased the property where the Goldfield Mill once stood and got to work. They recreated the mining tunnel, built the town’s photo shop, a general store, the Mammoth Saloon and the Goldfield Museum.

What to Do When You’re There

So, you drive to the outermost edges of Phoenix, pass Mesa and get to the outskirts of Apache Junction. The endless suburban sprawl gives way to the seemingly-endless desert. It’s hot, the kids are fighting and you’re wondering why the pioneers settled this inhospitable corner of the globe. Don’t panic and make an illegal U-turn, though, because you’re almost to Goldfield Ghost Town where your day is sure to turn around. 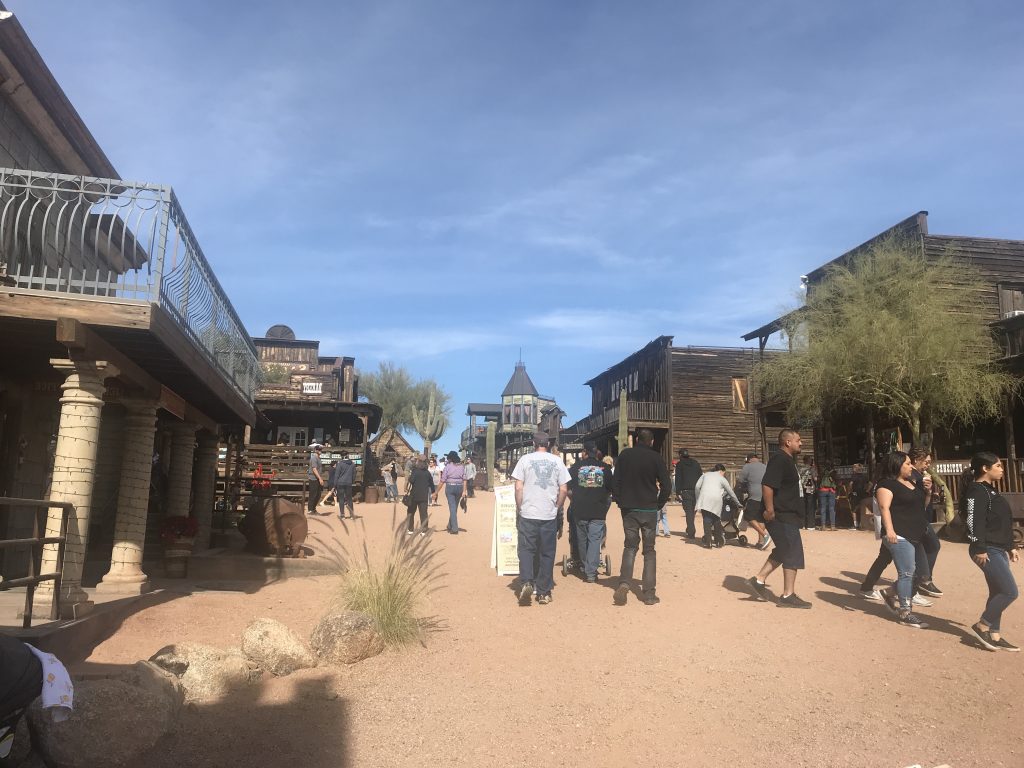 Tourists flock to the Goldfield Ghost Town for a Wild West experience.

Learn more about Goldfield Ghost Town and get directions on their website.