Who Are the Babbitts, One of Flagstaff’s Most Famous Families? 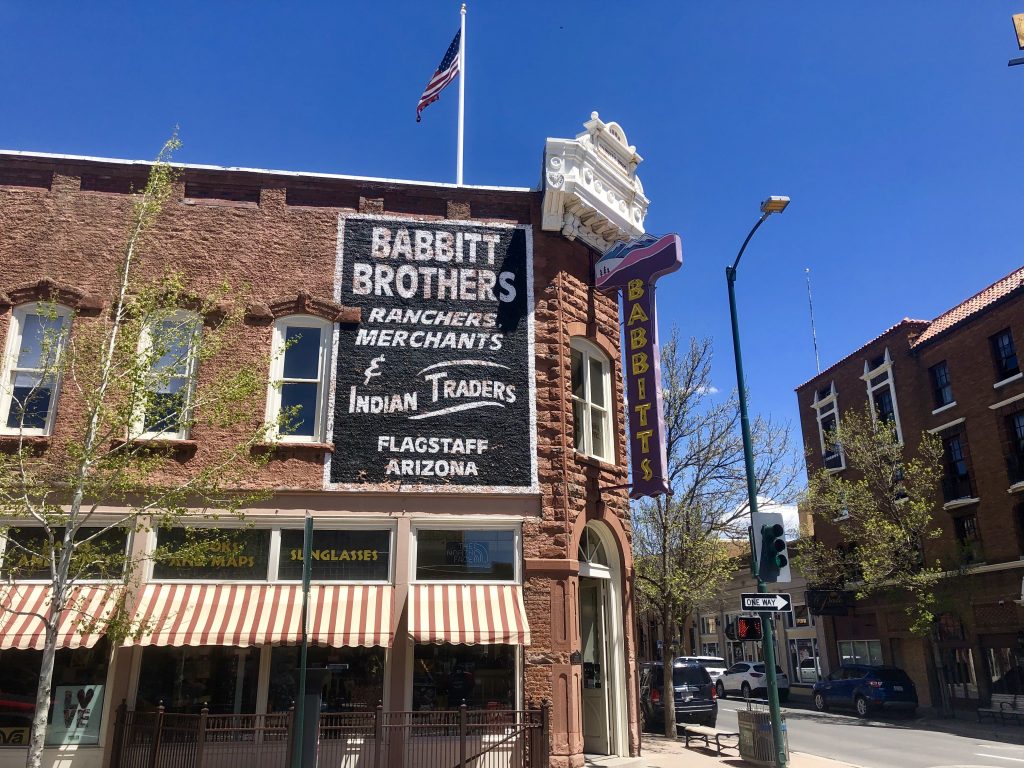 David Babbitt opened the Babbitt Brothers Mercantile, and sold goods like blankets, canned food and oil lamps. The original mural can still be seen on the side of the Babbitt Building in downtown Flagstaff.

If you’ve lived in Arizona for a while, or even if you just like reading up on famous Arizona families, chances are you’ve come across the Babbitts. After all, there’s a building on the Northern Arizona University campus christened Babbitt Academic Annex. At one point, there was a Babbitt Opera House where locals could see live orchestras. Right downtown, you’ll find the Babbitt Building, featuring a mural stating: “Babbitt Brothers: Ranchers, Merchants & Indian Traders.”

The Babbitt brothers are an integral part of Flagstaff’s history. So, what’s their story – and what makes them so unforgettable?

David and Billy Babbitt first arrived in Flagstaff on a February morning in 1886. The weather was dismal, and much of the downtown area had been scorched by a wildfire two months prior. At the time, the tiny northern Arizona town was home to only 600 people and a rambunctious collection of saloons. Flagstaff’s early economy was primarily comprised of timber, sheep and cattle.

While the Babbitt brothers were from a mercantile background in Ohio (and Flagstaff certainly wasn’t a heaven-on-Earth), they became enamored with the idea of ranching in northern Arizona. They put nearly all of their life savings, $20,000, toward buying some land east of Flagstaff and purchasing some cattle and sheep. Their CO Bar Ranch (named for Cincinnati, Ohio), became one of the most successful in the region, and they were the first cow outfit to run sheep on the same range. By World War I, they oversaw a flock of 100,000.

The Babbitts Make a Name for Themselves

Like any smart business owner would, the Babbitts diversified their revenue streams and expanded to other industries outside of cattle ranching. David and Billy convinced the other three Babbitt brothers, Charlie, George and Edward to move out west.

The five worked well together and opened a prosperous trading company, a soda fountain and ventured into the automobile industry – all while maintaining their thriving ranch. At their height, the Babbitt brothers virtually ran Flagstaff, and had a hand in more than 100 ranches spanning from Kansas to California. David’s house was the first in Flagstaff to have a bathtub.

Leaving a Legacy in Flagstaff and Beyond

While extremely successful, the Babbitts used their power and influence for good. The family is long-regarded for their dedication to public service, funding burgeoning businesses and consistently giving back to the northern Arizona community.

Bruce Babbitt, a descendent of the five original Babbitt brothers, is a former Arizona Attorney General, Governor, Bill Clinton’s Secretary of the Interior and prolific lawyer. He’s known for extensive work in environmental conservation, serving as a trustee for the World Wildlife Fund and is a board member at the Amazon Conservation Association. A deep-seated respect for natural spaces – ever since David and Billy Babbitt hopped off the train and fell in love with northern Arizona’s wild majesty – has been passed from generation to generation in the Babbitt family.

A reunion in 2011 gathered 507 current members of the expansive Babbitt family.

Few would have guessed that David and Billy Babbitt would have been successful in pursuing their dreams to ranch in the Southwest. Yet, they established some of the most successful businesses – leaving behind a legacy that reverberates to the modern day.